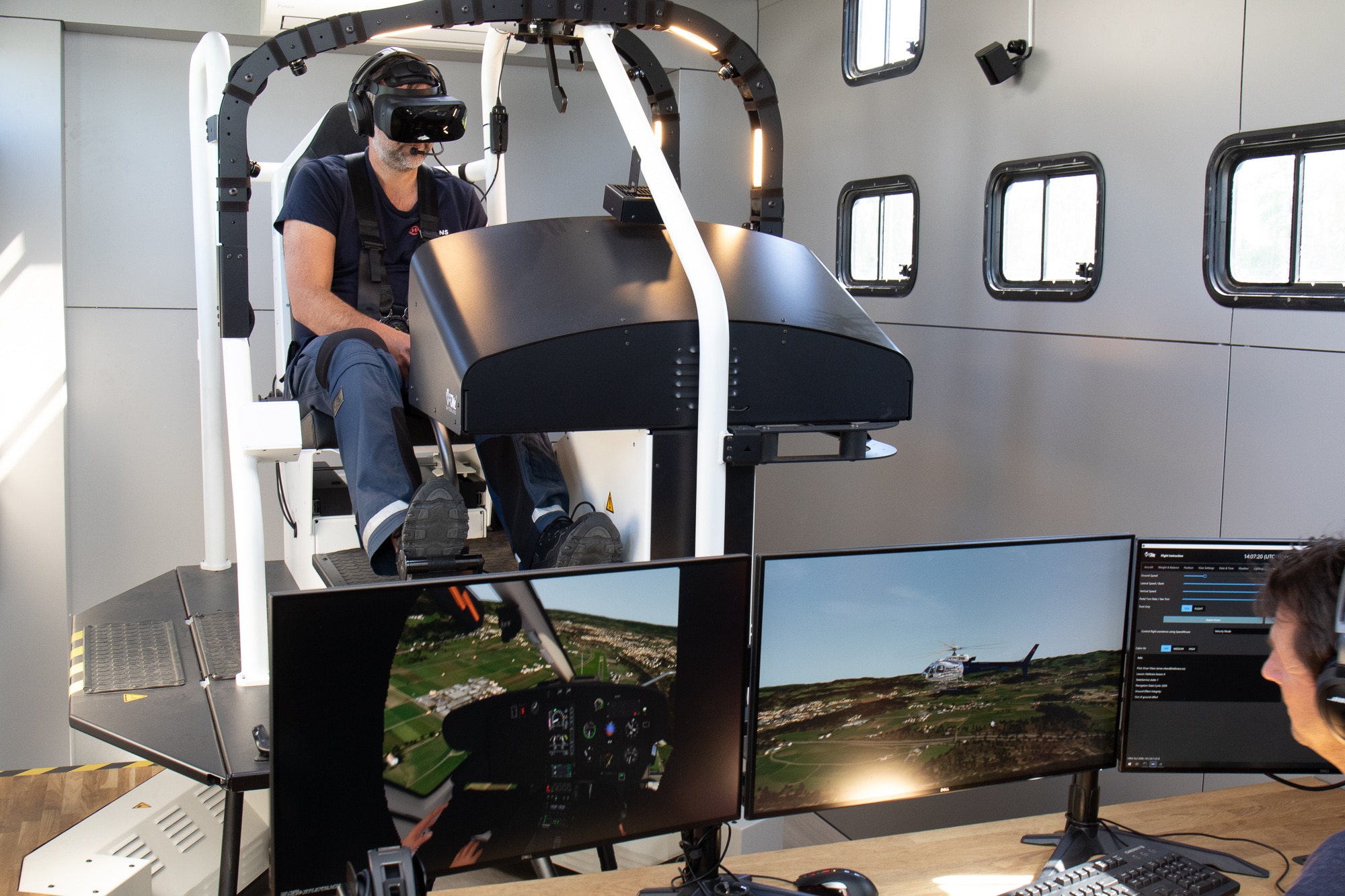 After a long and extensive process, the Norwegian Civil Aviation Authority (Luftfartstilsynet) has given Helitrans the thumbs up for pilots to complete training and certificate / licence renewal (OPC / PC) in an Airbus H125 VR simulator. Norway is the very first country in the world to formally approve the use of this type of VR simulator.

– “This is an important milestone for Helitrans and all the other operators within the onshore helicopter industry”, says CEO of Helitrans, Ole Christian Melhus.

– “Helitrans has for quite some time worked with the manufacturer, VRM Switzerland, to develop this VR simulator in accordance with our requirements and needs, as well as to have it approved by EASA, the European Aviation Authority, and the Civil Aviation Authority. It has been a long process, and we are incredibly happy that this has worked out.”

The onshore helicopter market uses Airbus H125 helicopters almost exclusively. With their high lifting capacity, flexibility and ease of navigation, the H125 has become the workhorse of the industry. The VR simulator is therefore specifically designed for this type of aircraft.

– “The entire Helitrans team, Norway’s largest onshore helicopter operator, is proud to be the first company in the world to operate an approved VR based FTD Level 3 Airbus H125 simulator. The approval from EASA and Luftfartstilsynet (Norwegian Civil Aviation Authority) warrants our decision to invest in this new technology, which will be paramount in increasing the safety level and, not least, bring the helicopter industry’s training level in closer alignment to heavy aviation through the use of a simulator.” says CEO of Helitrans, Ole Christian Melhus.

Melhus’s background is mainly from the airlines and corporate aviation, and he has first-hand knowledge of the effects of safety-focused and structured simulator training. He has therefore been a driving force in the use of simulator training and is satisfied that the onshore helicopter segment has a lot to gain from using this technology.

– “I am extremely excited to be part of this paradigm shift and the innovative, and sophisticated, training concept launched by VRM Switzerland, using high-resolution 3D graphics with 360-degree visual combined with realistic motion simulation. This makes it possible for us and other helicopter operators to build a rigorous training and safety culture, and, not least, reduce incident and accident rates in the industry.” Melhus adds.

As of 2022, the requirements for training and certificate renewal among pilots in onshore helicopters have changed, where annual training and a certification test on a simulator are now required.

The Norwegian Civil Aviation Authority has followed the development and qualification process of the new VR-based simulator.

Approval in Norway has also been well received by the manufacturer, in Switzerland.

– «For VRM Switzerland, it is unique to be part of facilitating flight schools and helicopter operators to be able to train and perform qualifications on a VR-based helicopter simulator. Our technology offers the pilot the realistic sensations of being in a real helicopter. Procedures and emergency procedures can be trained realistically and without risk, even for situations that can not be trained in a real helicopter» says Fabi Riesen, CEO of VRM Switzerland.

Helitrans’ pilots work with advanced assignments such as assembly of masts, pylons and power lines in the energy supply industry, sling load assignments, which require a high degree of accuracy and precision. Such customers place the highest demands on training and qualification before pilots can work for them. Many of the work tasks are difficult to train in a helicopter and therefore require simulator training.

– “In the past, we have leased conventional helicopter simulators abroad at high hourly rates. With this new technology platform, we foresee a unique opportunity to train all the twelve special operations such as sling load, ship landings, firefighting and more, in a larger and more realistic 360-degree environment.” says Melhus.

Traditional aircraft and helicopter simulators mimic the cockpit of the specific machine they simulate and use large screens that replace the windows and show the surroundings. The new VR simulator is built from a completely different approach.

Screens have been replaced with VR glasses connected to a powerful computer that produces advanced 3d graphics, not only of simulated surroundings, but also of the interior and the cockpit dashboard, with all the instruments. Update of the VR glasses is synchronised with the pilot’s head movements so that everything feels natural. Even the pilot’s hands that control the instruments are visualised in the VR glasses, so that the experience will be as accurate and realistic as possible.

The unit in which the pilot sits is mounted on an electrically controlled, mechanical platform that moves in accordance with the virtual helicopter and gives the pilot an extremely realistic sense of the movements the helicopter makes.

– “What this modern technology has achieved on that front is just absolutely amazing.” says Melhus. “The realism of the new simulator surpasses traditional simulators by a long way with its 360-degree visual and we have had great interest in the technology from other companies and the Norwegian authorities as well, who have had many representatives visit to test fly the simulator and experience how it”

In addition to the realism of these new simulators, this is more than just a flight simulator where you fly from A to B and practice emergency procedures.

– VRM Switzerland has put an enormous amount of work into creating realistic training programs which are adapted to various types of missions, such as cargo flying and sling loads, installation of masts, firefighting, and a range of complex manoeuvres. Until today, there have been no simulators that can offer this form of training variation or 360-degree realism.” Melhus says.

Helitrans has already been using the VR simulator internally for its own pilots but will now also rent it out to other operators.

Helitrans has invested in two Airbus H125 simulators, one located at CAE’s training and simulator centre at Gardermoen, by Oslo’s main airport, together with other airline flight simulators based there, while another has been installed at a mobile facility that can be moved as needed. This provides great flexibility for both the company’s own and for others’ needs.

– “Instead of sending pilots to helicopter simulators abroad, we can now carry out training in the districts where the pilots are located. This is positive for everyone involved including the environment, where we also ensure good implementation opportunities combined with reduced costs” Ole Christian Melhus concludes.